Reviewing our global activity during 2020 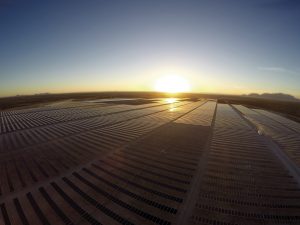 Reviewing our global activity during 2020

In an atypical year like this 2020, the renewable energy sector has strengthened, becoming a refuge value for industry and, by extension, for the world economy. This has become evident in growing markets such as Australia, where, according to a report by Melbourne’s Climate and Energy Collegue, up to 75% of electricity generation came from a combination of PV solar and wind energy.

With this situation, at GRS we have maintained our activity in the country, meeting the requirements of our ongoing projects: Goonumbla, Winton, Molong and Blue Grass solar PV plants. In the latter, which will begin its construction phase during the next quarter, we will create over 400 local jobs, in accordance with our recruiting policy in the countries in which we operate. “In the midst of the ecological transition, with Australia as one of the world’s standards in the 2030 objective to be completely renewable by the next decade, we are pleased to carry out increasingly ambitious projects that contribute to that goal“, explained Carlos López, our Managing Director in the oceanic country.

In fact, the energy produced from the four photovoltaic plants will prevent the emission of more than 660,000 tonnes of CO2 into the atmosphere each year. One of the objectives within Agenda 2030 is the reduction of the carbon footprint while promoting the integration of the renewable model in an energy mix still dependent on non-renewable sources such as coal.

Spain is another country with greater integration of renewables, having registered several national generation records during the year, the highest being in May, when PV solar energy participated in 9.3% of the energy mix, according to data from Red Eléctrica de España. At GRS, we have once again consolidated our position in the country, energizing our project in Zaragoza and completing the construction of another one in Seville. The backing of the sector due to the new regulations approved by the Council of Ministers, together with the boost given by the new and upcoming auctions of renewable energy aims to place Spain in the leading positions in green generation.

At present, our country has the greatest renewable potential in Europe, although generation is still at a lower level than countries like Germany or France. However, the institutions are considering a commitment to encourage this type of energy source, with new auctions starting at the end of January next year. “The strategy of plans such as the PNIEC is proposing a scenario in which Spain, supported by international companies with their headquarters here, as in our case, would be one of the driving forces to make the energy transition a reality“, says our COO, Jordi Vega.

As part of our international expansion strategy in countries with a strong renewable industry, we plan to open a new office in the state of Texas, in the United States in the coming months, from where we will reactivate our activity in search of new business opportunities.

José Miguel Plaza, Managing Director of GRS in USA, explains: “At GRS, we understand that renewable energies must be supported by a strong, consolidated and future-oriented industrial fabric“. For this reason, he points out, “we are committed to returning to the United States where we already have a presence with several photovoltaic plants built, and its 2030 objective in which the contribution of renewable energy reaches 30% of the installed capacity“.

Although this year has been a major challenge for the company, we have maintained a remarkable level of growth, especially in our Project Development division, where we have welcomed new members to the team.

We will strengthen our position as a developer in key markets like the United States and Australia, where we already have a proven presence, as well as in Italy.

“We work in markets with continuous demand and where we already have a previous presence, which allows us to ensure an exhaustive knowledge of the area and business opportunities“, says Alberto Macía, our Project Development Director.

South Africa, a mainstay of the O&M division

Our Operation and Maintenance division has also added new projects and contract extensions during 2020. To those mentioned previously, we will be in charge of the OyM tasks for the 150 MW of the Lesedi and Letsatsi PV plants, and the new agreement for the Jasper Power Project, located in the Northern Cape, which has 75 MW of installed power.

In addition to the Operation and Maintenance activity that we carry out in South Africa, we have recently successfully energized the Greefspan II PV plant, which will produce approximately 150,000 MWh of clean energy per year and with which, in the words of our Country Manager in the African country, Dylan Tudor-Jones, “we will contribute to the industrialization of the Northern Cape of South Africa, creating jobs and promoting the use of renewable energies in a country that urgently needs new generation capacity“. In total, we have secured more than 213 MW of contracts on South Africa.

Despite the situation caused by the pandemic, 2020 has served to demonstrate that our commitment to the client, our professional team, and our ability to deliver projects on time are the three keys to our success, regardless of the situation.

We currently have over 1.5 GW of pipeline projects, spread across Australia, Spain, South Africa, Chile and Portugal. “We maintain our strategy of high quality levels in our projects, both in design and execution, which allows us to continue adding new clients to our portfolio every year who trust and repeat with us.”, says Oscar Hurtado, our Commercial Director.

We continue to work diligently so that 2021 will be a year in which PV solar energy becomes stronger, growing in MW installed and enabling a safe and sustainable energy transition.