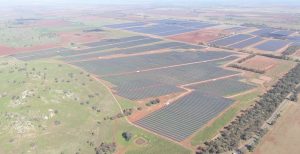 GRS has successfully energized the photovoltaic plant in Goonumbla, Australia, built for Fotowatio Renewables Ventures (FRV) in a joint venture with the photovoltaic module manufacturer CHINT. Thus, the Spanish EPC contractor takes the preliminary and final step for the commissioning of the solar PV plant and is ready to start the Grid Connection tests shortly after the successful registration with AEMO. Located about 10 kilometers west of the city of Parkes and 280 kilometers northwest of Sydney, New South Wales, the Goonumbla Solar Farm has 67.8 MWac of installed capacity that will produce approximately 195.000 megawatt hours (MWh) of clean energy per year.

Such figures guarantee the energy supply for 45,000 Australian homes, while avoiding the annual emission of approximately 140,000 tons of CO2 into the atmosphere. Goonumbla covers an approximate area of 385 hectares and has 269,235 photovoltaic modules. In line with the company’s contracting policy, the construction of this plant has created approximately 150 local jobs. In addition, the company has trained six workers of the region to carry out the Operation and Maintenance functions.

As its CEO, Juan Pedro Alonso, explains, “the energization and registration of Goonumbla comes at a time of great activity for GRS, with the construction of Winton and a recent fourth contract in one of the most promising countries in the renewables market, which is a matter of pride and a great boost to continue growing”.

This is the second project of the three that the Spanish EPC contractor has built for FRV in the oceanic country, after Lilyvale Solar Farm and prior to Winton Solar Farm, which is under construction. GRS has already awarded more than 364 MW on Australian land, which, together with its great capacity to undertake large-scale projects, has consolidated it as one of the leading EPC contractor in one of the most active photovoltaic markets in the world.