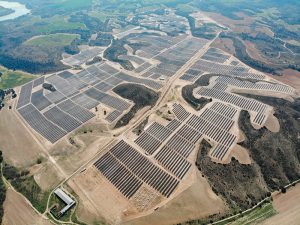 GRS has successfully energized the Desafío Solar photovoltaic plant in the municipality of Escatrón, Zaragoza, owned by Everwood Capital, thus taking the preliminary step for its start-up and the start of the grid connection tests. The PV project, which occupies 160 hectares of land on which 133,290 photovoltaic modules and 1,481 solar trackers have been installed, has 50 MWac of installed capacity that will produce approximately 87,346 MWh of clean energy each year.

Likewise, once the installation produces 100%, it will supply energy to 12,500 Spanish homes, while avoiding the annual emission of approximately 46,500 tons of CO2 into the atmosphere. The Spanish company has built Desafío Solar in the estimated time, despite the partial paralysis caused by the Covid-19 pandemic. This shows the professionalism and efficiency of the team in executing its projects and adapting to the needs of its clients. In this sense, its Construction General Manager, Jordi Vega, points out that “the work of all those involved during these months has been commendable. GRS is very active in the Spanish photovoltaic market, with new contracts and future business opportunities, so successfully achieving the registration of Desafío Solar, in the stipulated time, is nothing but the confirmation that we are on the right track“.

Desafío Solar is the first solar park that Everwood Capital is financing in Spain and one of the last projects that the Spanish EPC contractor has built in a country that, with the recent approval of new renewable auctions for the second half of the year, is increasingly aligned with European Green Pact initiatives. As Oscar Hurtado, Commercial Director and Global Head of Tenders and Contracting Team explains, “the great moment for renewables in Spain is approaching at a speed that allows us to undertake projects such as Desafío Solar, while we adapt to the measures that are being approved by the government to contribute to the energy transition“. In this sense, GRS has awarded more than 150 MW in the country and continues to work on the development and construction of new projects that will strengthen the market and help “contribute to the economic recovery of Spain, through the renewables market, one of the safest values with a view to the future“.