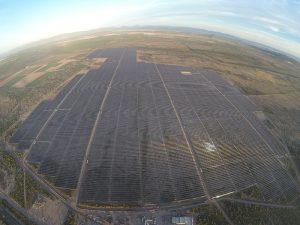 Mexico, one of the Latin America’s countries where the sun radiates most, has become one of our favorite geographies. Recently, we have put into operation our largest PV plant so far there: Bluemex Power, for EDF. Located in the state of Sonora with 120 MW of power, it is estimated to produce enough energy to cover the electricity demand of 40,000 homes. After Camargo and Energía Limpia de La Laguna, we expand our presence in a country where it already has 243 MW contracted. In this sense, we pose a promising future for one of the geographies with the greatest potential for energy exploitation of the photovoltaic sector.

Bluemex Power, whose produced energy will prevent emissions into the atmosphere equivalent to more than 30,000 vehicles, will contribute, as confirmed by Jordi Vega, our Construction General Manager, “to the cleanliness of the atmosphere in a country where the production of renewable energy is growing exponentially, precisely because of that excess of CO2 emitted“. Mexico is the Latin American country that invests more money in renewables, not only because of a matter of performance, but also of compensation, since they are also the country with the most trafficked capital in the world. Pollution has increased in Mexico almost 50% in the last 25 years, according to figures published by the National Institute of Ecology and Climate Change (INECC) in its National Inventory of Gas Emissions and Greenhouse Compounds, which highlights the need to clean the atmosphere that Mexican citizens breathe.

One of the requirements that we have always encouraged is to generate local work, hiring workers from the country in which we build and training them so that, once the operation and maintenance phase is established, they can carry it out. In this way, the construction of Bluemex Power has generated 1200 local jobs, contributing to the good occupational health of a sector that is gaining more and more weight in the American continent. Between the execution of the project and obtaining the commercial operation, we have continued to strengthen our business with a fifth contract in Mexico, which has not gone unnoticed in the Federal Electricity Commission (CFE), from which they congratulated our entire team for the work done during the interconnection of Bluemex Power. The photovoltaic horizon of the Spanish market shines with its own light in Latin America.