We have built the largest solar park in Panama

The renewable energy market in Panama is constantly developing, growing at an annual rate of 9.2%, according to the latest report from the General Comptroller of the Latin American country. In the same way, bank credit for energy programs increased by 39% during 2018 thanks, in large part, to the increase in clean energy projects such as those we develop. In fact, we have recently completed the construction and commissioning of the largest solar park in Panama. 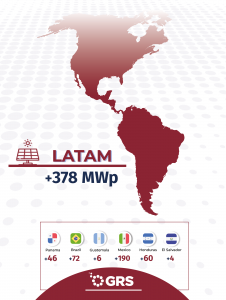 This space comprises a total of 40MWac of power installed, divided into four solar plants of 10MWac each, and is committed to offering 100% renewable energy. This increase in clean energies in the Panamanian geography will have a positive effect in the economy of its citizens. Not in vain, these 40MWac will produce enough energy to cover the electricity demand of approximately 30,000 families. In this way, the regulatory modification of the Government has completely changed the way of consuming energy, both in homes and companies. Panama has opened the doors to renewable energy and does not seem to paralyze that growth.

Currently, having built 12 PV plants and installed more than 377MWp in Latin America, we are one the most active Spanish companies in the recent months. Present in almost all the geography of the continent, our photovoltaic installations have landed in some of the countries with the greatest solar radiation on the planet, such as Mexico, where we have recently signed our fifth contract, or Brazil, where we are developing larger projects. To settle the renewables as the only source of energy, the action of companies like ours is crucial, as has happened in Panama, to offer a business alternative that contributes to the reduction of CO2 emissions, the increase in life quality and bill savings.